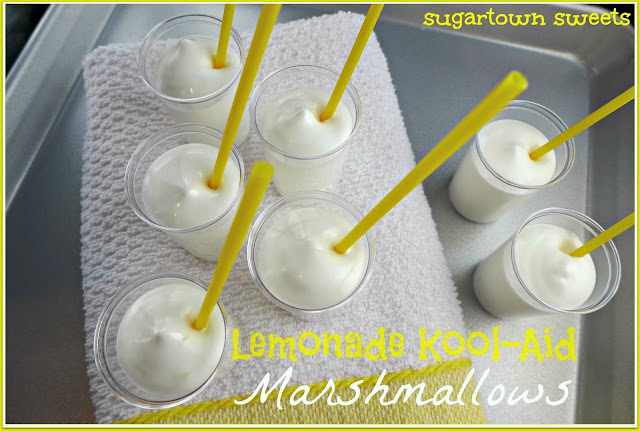 Nothing says Summertime to me like good old fashion lemonade..and, by old fashion I'm speaking of the
Kool-Aid variety! Growing up, our frig was never without a gallon jug of the tasty stuff. My all time fave flavor was orange..but lemonade ran a close second. And since we're deep into the hot summer season here in Georgia, I thought why not re-create that taste into a nice batch of marshmallows! 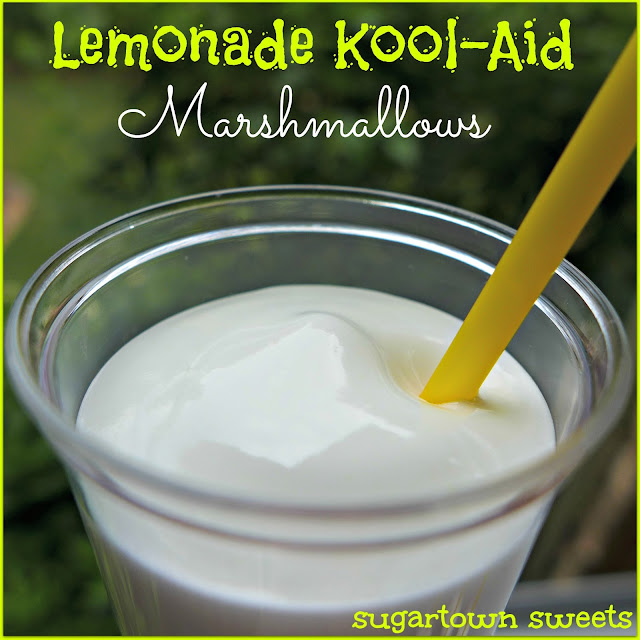 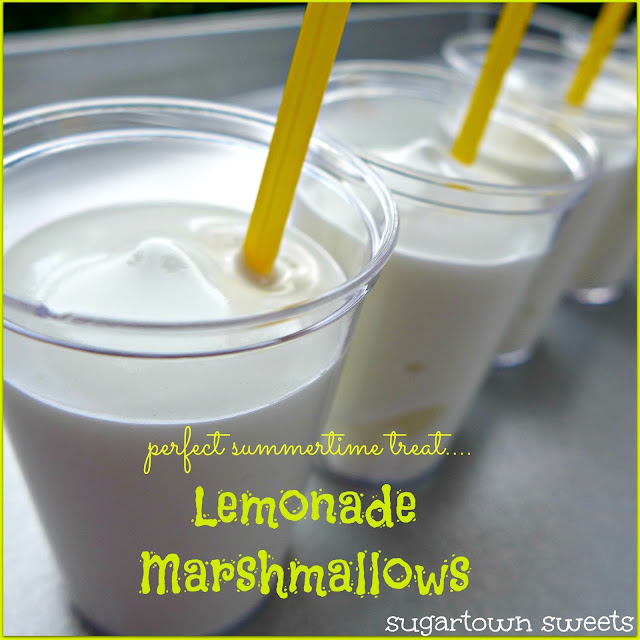 Kool-Aid powdered drink mix, Kool-Aid Jammers, sugar, salt, corn syrup & unflavored gelatin are the ingredients needed. You will also need a pan prepared with non-stick spray if want marshmallows that you can cut into squares. I just used tiny little cups for a fun size treat. 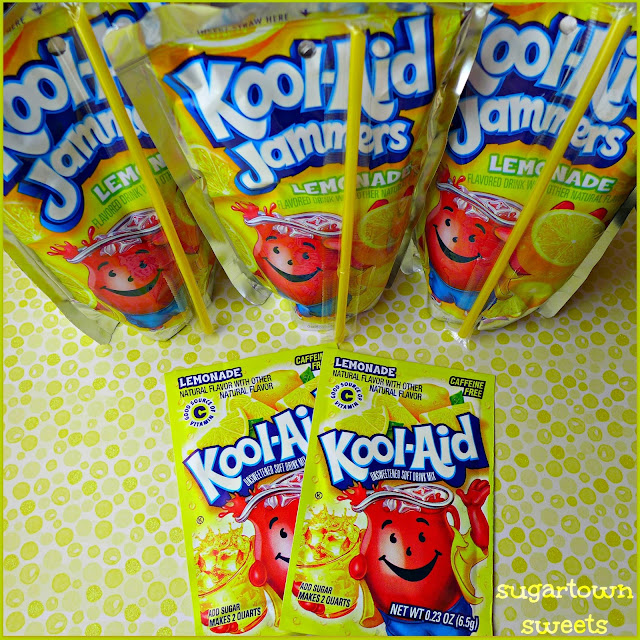 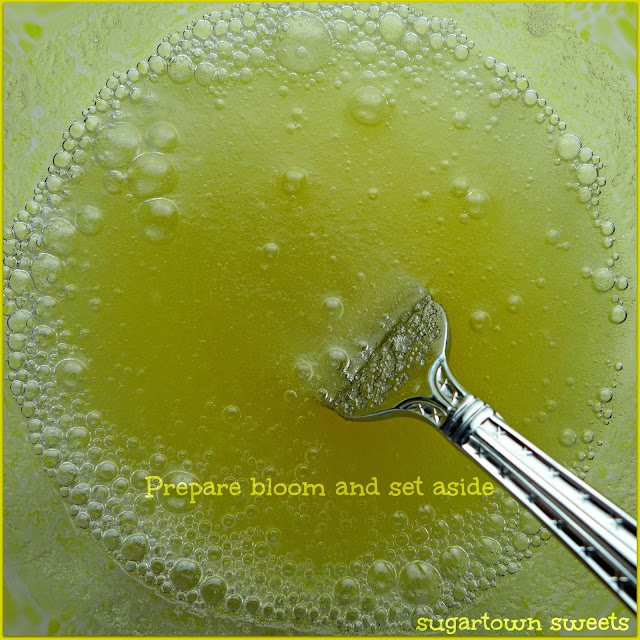 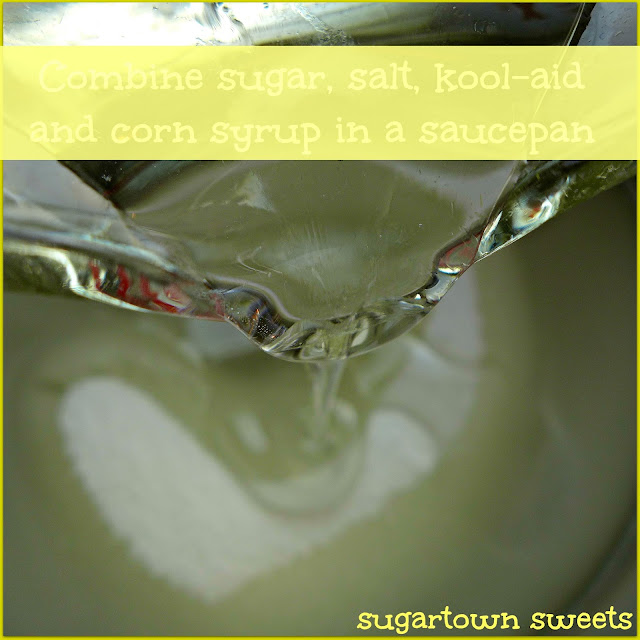 If you want a milder flavor marshmallow, you might want to pass on adding this extra teaspoon of Kool-Aid powder..but if you like the tart flavor like I do, go ahead and "kick it up a notch"! 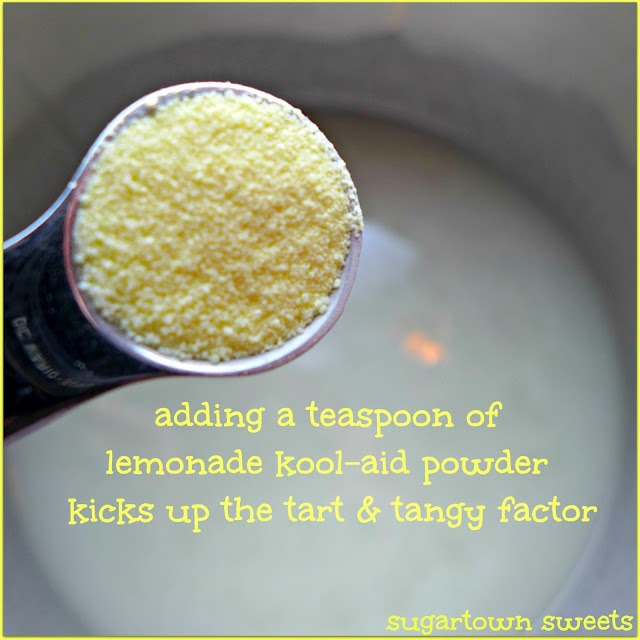 Stir mixture over medium heat till sugar has dissolved. 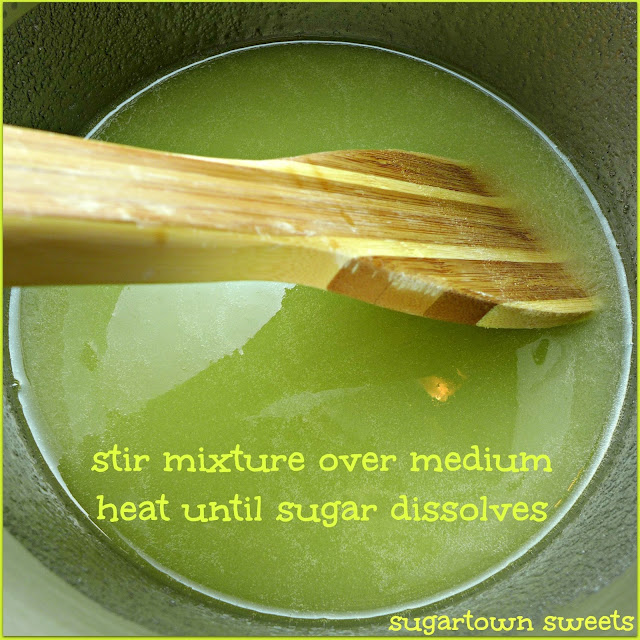 Attach candy thermometer to pan making sure it does not touch the bottom.
Continue cooking to 235 degrees (soft ball stage) without stirring. 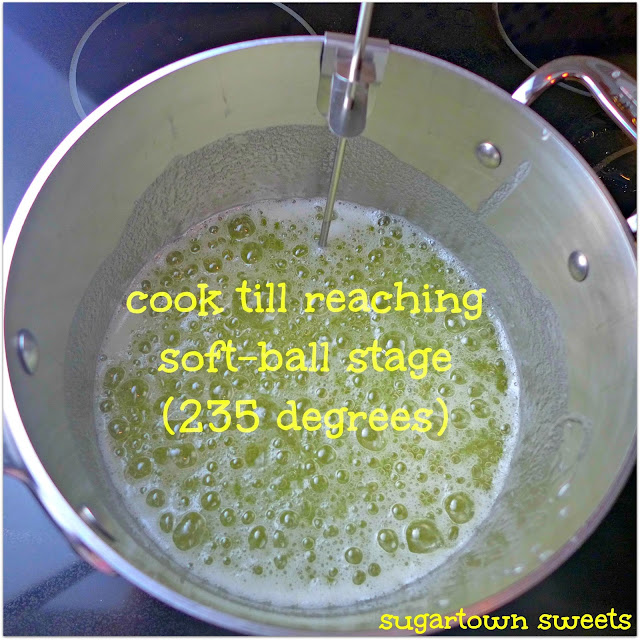 Remove pan from heat, add bloom and set aside. 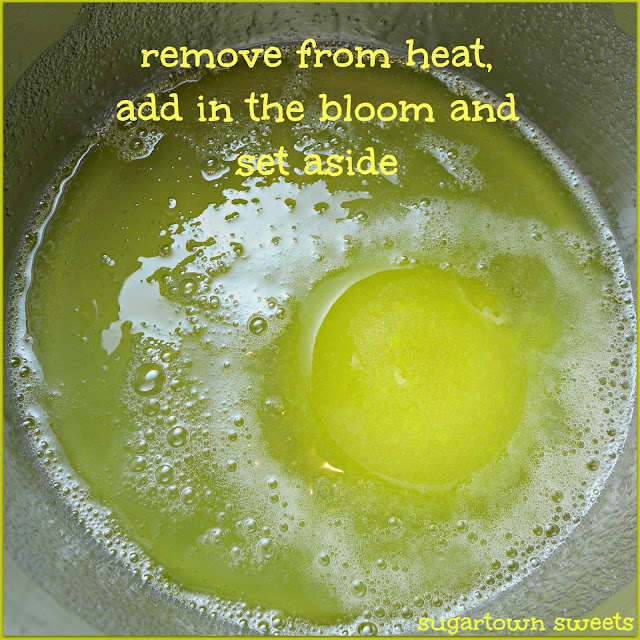 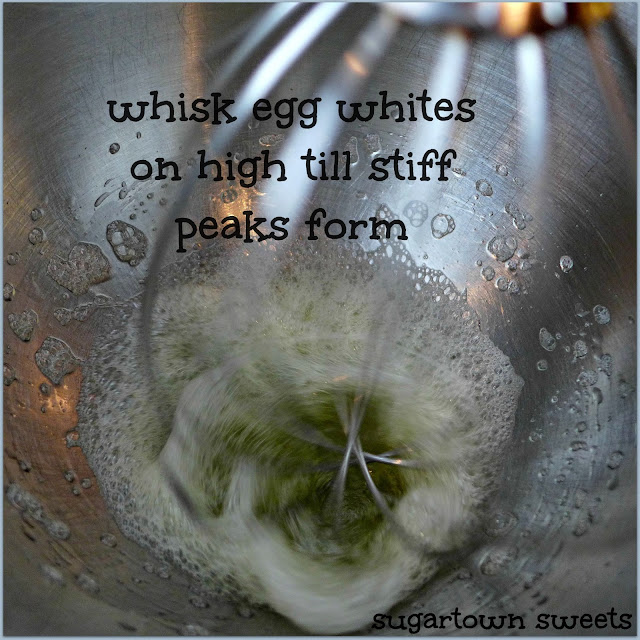 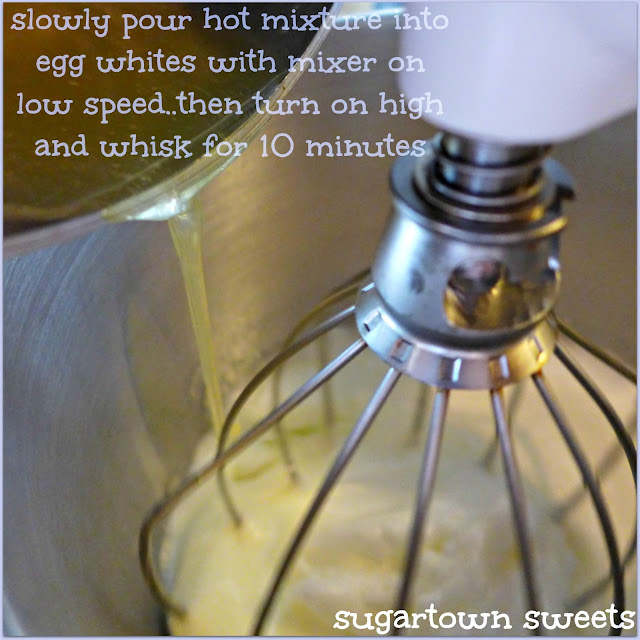 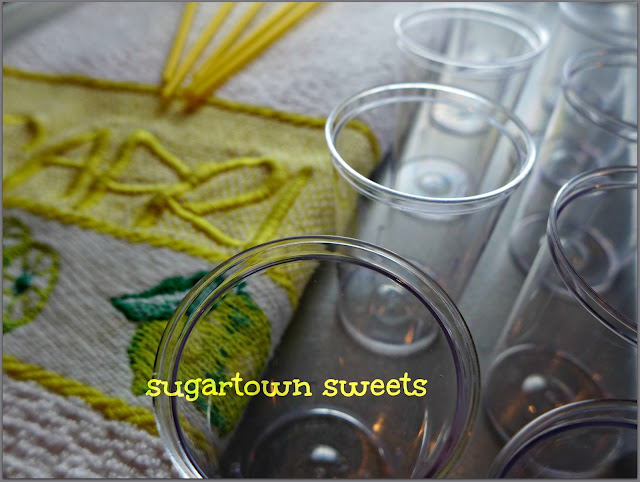 If you want the traditional cut marshmallows just.. 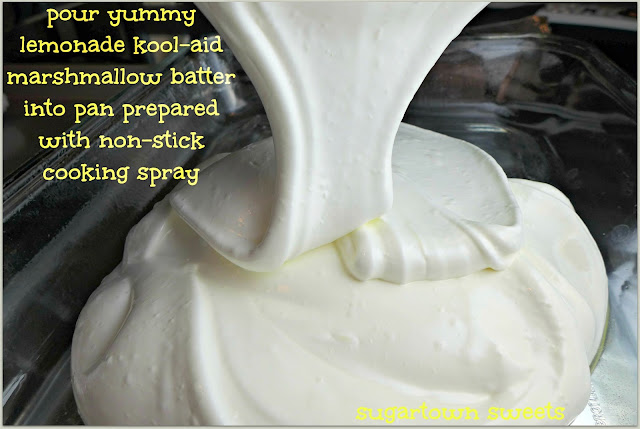 2 egg whites
In mixer with whisk attachment, beat egg whites on high till stiff peaks form. Turn mixer to low speed while slowly pouring in hot mixture. Switch mixer to high speed and continue beating for 10 minutes. Pour mixture into prepared pan and let candy cure for at least six hours. I usually let mine sit overnight.
When set, turn candy out onto a cutting surface prepared with equal parts confectioners sugar and corn starch. Lightly spray a knife or pizza cutter with non-stick spray to cut candy.
I used a gallon size baggie, cut off a small corner and inserted a large circle decorating tip
to pipe candy into the tiny plastic cups.
~~~~~~~~~~~~~~~~~~~~~~~~~~~~~~~~~~~~~~~~~~~~~~
Wishing You All a Sweet Summertime Day From
Sugartown Sweets
Thanks For Stopping By! 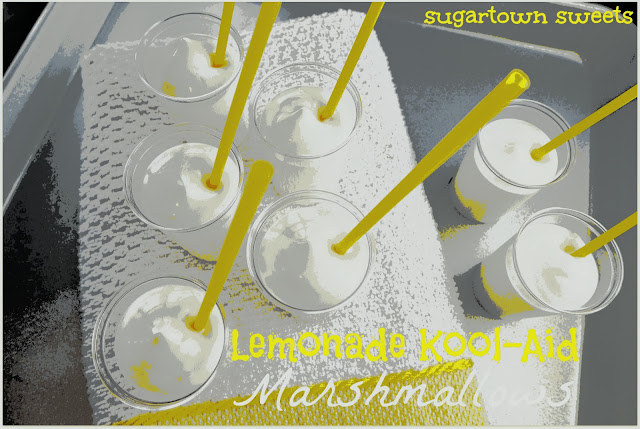 Posted by Sugartown Sweets at 1:11 AM 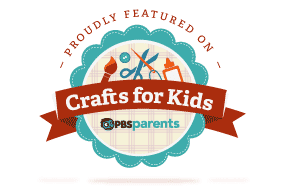 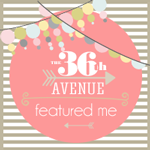 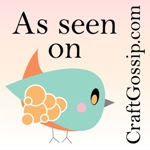